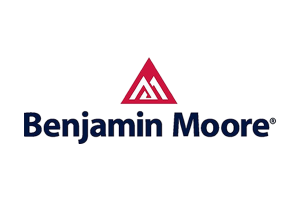 Benjamin Moore Products  Benjamin Moore & Co. a Berkshire Hathaway company, was founded in 1883. One of North America’s leading manufacturers of premium quality residential, commercial and industrial maintenance coatings, Benjamin Moore maintains a relentless commitment to sustainable manufacturing practices and continues to develop the most eco-responsible formulations.
Benjamin Moore & Co. is at the forefront of product innovation, with a commitment to research and development unrivaled in the architectural coatings industry. At Benjamin Moore laboratories and manufacturing facilities, scientists and technicians work to exceed the already superior application, performance properties, and environmental safety of the products.
Benjamin Moore’s commitment to colour inspires an ongoing search for the perfect hues, the ones that lead customers to claim: “that’s the colour I want.”   More than a century of commitment to producing superior products and unrivaled colours has its rewards: Benjamin Moore’s paint is the number one choice of interior designers.
People who choose our products know they’ll get the inspiration and support to make their vision reality. They depend on our extraordinary colours and product performance. Their trust defines Benjamin Moore.  hed a New York corporation in 1889 and soon after they incorporated in New Jersey, the company’s current home.

Irish born Benjamin Moore and his brother Robert opened Moore Brothers in Brooklyn, New York, having first emigrated from Ireland in 1872. True entrepreneurs, they started with $2,000 and one product, “Moore’s Prepared Calsom Finish,” which was sold exclusively through independent retailers. Moore Brothers built their company on Benjamin Moore’s belief in “The exercise of intelligent industry in the spirit of integrity”, and a dedication to manufacturing excellence and quality.   Moore Brothers Paint Company opened at 55, Atlantic Avenue in Brooklyn, New York. The building burnt down within a year, but the brothers moved to a new location and were back in business 3 days later, displaying a tenacity that would serve their company well throughout its long life. Benjamin and Robert establis